Gibraltar Promotions & Omali's High Fashion present... CHILDREN OF JAH Midnite In Trinidad "3rd Chapter" Haile Selassie Coronation Celebration night before the holiday! http://midniteband.com/tour.html time is not counted from daylight but from Midnite... Hailing from St Croix, Virgin Islands Lead singer Vaughn Benjamin's electrifying voice seems an amalgamation of many great voices in reggae-soulful, chanting, edgy. Vaughn's potent lyrical style and his brother Ron Benjamin's exquisite production, vocals, dub, arrangements, keyboard & bass musical arragements form the nucleus of this musical - rootsy heavy sound, which includes: Christian Molina (drums), Edmund Fieulleteau (guitar), Edwin Byron (guitar) and Ras L (keyboards). Midnite weaves the cultural lyrics of "old school" roots music with modern day experiences to create a unique listening encounter. Roots Reggae - naked and raw is an apt description for Midnite's musical style, in which they forgo the frills of extensive remixes, overdubbing and other musical refinements. "Unpolished" is the title of their debut album which includes such classics as "Don't Move", "Mama Africa", and "Love the Life You Live". Originally released in 1997, while the band was located in Washington, DC. In 1999, Midnite linked up with Wildchild! Records for their second release "Ras Mek Peace". Incredibly, this album was recorded using only two channels and was mastered without any reverb, filtering, compression or equalization. Songs like "Hieroglyphics", in which graffiti is likened to ancient Egyptian hieroglyphics, showcase the intelligent songwriting that pervades all of Midnite's works. Following the release of Ras Mek Peace, Midnite returned to live in St. Croix so that they could work with the local musicians and make recordings at their African Roots Lab without any outside interference. The fruits of these labours can be found on their third album "Jubilees of Zion", which was released on their independent Afrikan Roots Lab record label. The expansive, hypnotic rhythms continue, alongside the messages of peace, universal brotherhood, and cultural resistance to Babylon. In June 2002, Midnite made their Northern California debut at the 9th Annual Sierra Nevada World Music Festival. That same month saw the release of Midnite's fourth album "Seek Knowledge Before Vengeance". Released on their Afrikan Roots Lab record label, this album raises the bar of cultural roots reggae, as we know it today. Midnite explodes in live performances with sets that often exceed 3 hours. Their vigorous, weighty sound, driven by the punchy bass lines creates a vibe that penetrates straight to the heart. These epic musical communions have earned Midnite an enormous following throughout the reggae community. By breaking all the rules, Midnite is setting a new standard. Armed with a firm foundation in Jah Rastafari, their natural talents, and a strong and uncompromising musical vision, Midnite champions a unique sound that is on the cutting edge of modern roots music. ======================================= The return of the Midnite Band has been long overdue, and even that is an understatement. The first 2 shows were a success with Vaughn Benjamin and the band really enjoying the vibes. We expect this show to fall nowhere short of the last 2, with Midnite coming to let off some of their new hits that have released since. Don't miss this one! SHOWTIME: 8PM SPECIAL GUEST ARTISTS: Kushite, Bucha, Cruickshank DJ's: Solid Rock, Black Chariot, Nyahbinghi TICKETS: General.....$200. VIP.....$350. TICKET OUTLETS: Converse Store.....West Mall Converse Store.....Trincity Mall Omali's High Fashion.....A-S Mall, High St. San Fernando Omali's High Fashion......High St. Siparia Fat's International.....Arima Bobby's Bar.....Curepe Nyahbinghi's Cultural Store.....EMR. St. Joseph Kamara's Cultural Store.....Chaguanas Blackstar Bobo Kitchen.....St. Augustine Alwyn's.....Pt. Fortin or contact Troy 338-4033.....Turf 476-2992.....Lioness Marsha 462-5117 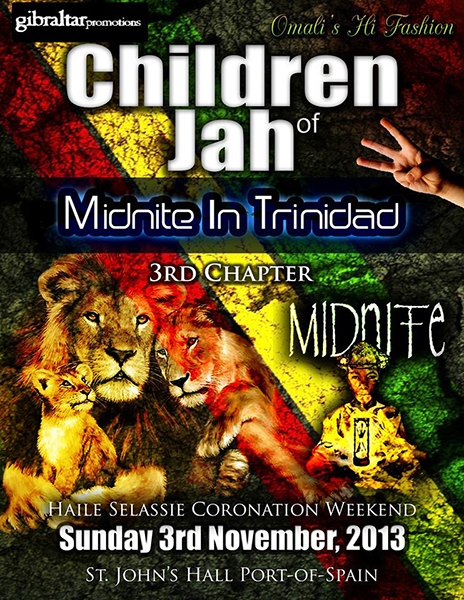 Nice to meet you