Ramdeen Ramjattan known as John Agitation (born July 24, 1927 Caratal, Trinidad and Tobago) is a comedian and storyteller. He is a graduate of the Progressive Educational Institute and served in the Trinidad and Tobago Civil Service[citation needed]. He was also the first comedian in the Commonwealth of Nations to win an election.

In 1951, at 24, Ramdeen was introduced to the Trinbagonian national audience by Landy de Montbrun, a leading local comic at the time. He told a joke, slightly nervous that he was crossing the boundary of taste. But the crowd was elated. "They were very happy to see a (dark-skinned) fella," Agitation later remarked. 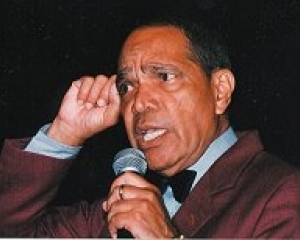