S.W.E.A.T – “Soccer With Extreme Alternative Twists” Presented by WILD Goose at the Hasely Crawford Stadium Training Grounds Is an invitational only, football tournament, unlike regular football tournaments known as soccer picnics, S.W.E.A.T will begin at 2:00pm and run into the night with the latter stages of games being played under lights. SOCCER: The tournament comprises 16 teams, with 4 groups of 4. These groups will comprise the nation’s top Carnival Bands, Radio Stations, Event Committees and Corporate T&T. There will be 10 players per side each vying for the ultimate cash prize of $10,000.00 a gold trophy award, 10 gold medals along with bragging rights. Also the team that sells the most tickets and or has the largest supporting crew will win $5000 to be donated to a designated charity of their choice. Alternative twists: S.W.E.A.T is a 'lime" and patrons will enjoy the following TWISTS: - Entertainment all day courtesy Slam100.5 - Guest artist performances - Riddim section -Free premium Shots -Drinking Games - After Party AND MORE..... Tickets are priced at $50.00 and available through Teams and the following Committee members: Joel Auguste Isaiah Frederick Karega Alleyne Renalia Kalichiran Melissa F-C Aaron "Local" Fingal Arvinder R Michelle Pounder Khama Phillip Kyle Leqauy Kella-marise Awai Rachelle Singh Jamie Emanuel "German" Johan Ornella sch Chad Appoo Kwasi Taylor SPONSORED BY: Slam 100.5 Flavorite Lucozade Degree Deodorant Maco Taco Beids By Chuff 1ndividual Asthetics 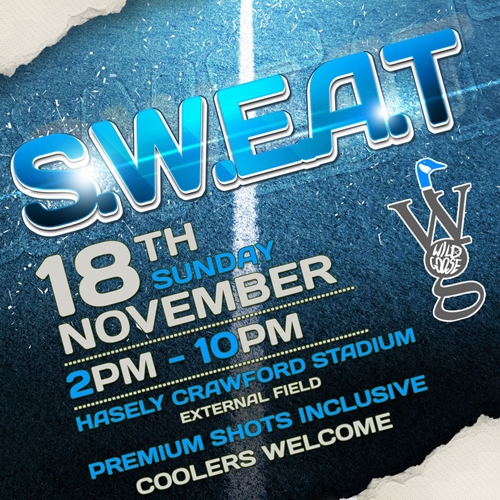 Get Directions to Hasely Crawford Stadium