Hosted by The Lydians

"Deo Gratias" (in Latin, "Thanks Be To God!"). The Lydians are giving thanks to God for the 40 years of music, for the musical directors who have shaped us and for the goodwill, kindness and support of everyone who has helped us along the way! For this year's Christmas Story, the Lydians will be visited by three Musical Muses, representing the Music of Lydians past, present and future! The concert will feature some of our greatest Christmas hits, show-stopping pieces from our 40-year repertoire, excerpts from 5 performed Operas and a sprinkle of new music and arrangements from our Calypso and Parang traditions.

JOIN US FOR THE GALA
A special anniversary Gala performance will be presented on Friday 13th December 2019 at Queen's Hall and will feature a sing-along of Christmas carols with the choir in the Queen's Hall lobby and a ceremonial ornament hanging for all attendees on the Caribbean Christmas tree.

[40 YEARS OF MUSIC EXCELLENCE]
The Lydians - one of the premier musical groups in Trinidad and Tobago, combines singers, Steelpan players, African and Tassa drummers and treasured creative collaborators.

Started in 1979 by Bishop Anstey High School Music Teacher, Mrs. Joyce Spence, the Lydians began with mostly past pupils of the school and other invited members. In 1984, Ms. Alma Pierre took direction of the choir and in 1987, Dr. Pat Bishop T.C., D.Litt Hon. agreed to take up the baton until her passing in 2011. From July 2017 to July 2019, the group operated under the musical direction of Ms. Lorraine Granderson. The choir has also been conduced by many superb musicians such as Mr. Carl-Anthony Hines, Mr. Victor N. Prescod and Maestro Jesus Beltran Ruiz Acosta of Venezuela.

Under Pat Bishop, the Lydians made history and established the Lydians as a global brand in Trinidad and Tobago - one of the very few musical organisations in the English-speaking Caribbean to attempt interpretations of full-staged major operas, oratorios and requiem works over the years. The choir also continues to be deeply committed to pro bono community service performances and has also shown its prowess at the T&T Music Festival winning over thirty (30) championship trophies over the years. The Lydians also achieved one of the nation’s most prestigious awards – The Hummingbird Medal – Gold in 1991 for loyal and devoted service in the sphere of singing.

For 40 years, the choir, under its various musical leaders have pioneered, excelled, boldly experimented, surpassed the boundaries of artistic experimentation and established the group as a musical organization of renown in the Caribbean and the world.

Beyond marking the anniversary of this musical institution, the Lydians also celebrate an existence as:
- A family
- A performing community
- An artistic refuge
- A home for the fostering of creative, communal, and family ties
- An adventure of self-development, growth and change
- A lens through which we confront our humanity, and nourish our souls and those within our society

JOIN THE GRAND CELEBRATION this Christmas, as we sing with thanks and jubilation, "DEO GRATIAS!" "Thanks Be To God!"

There are no additional photos for this event. 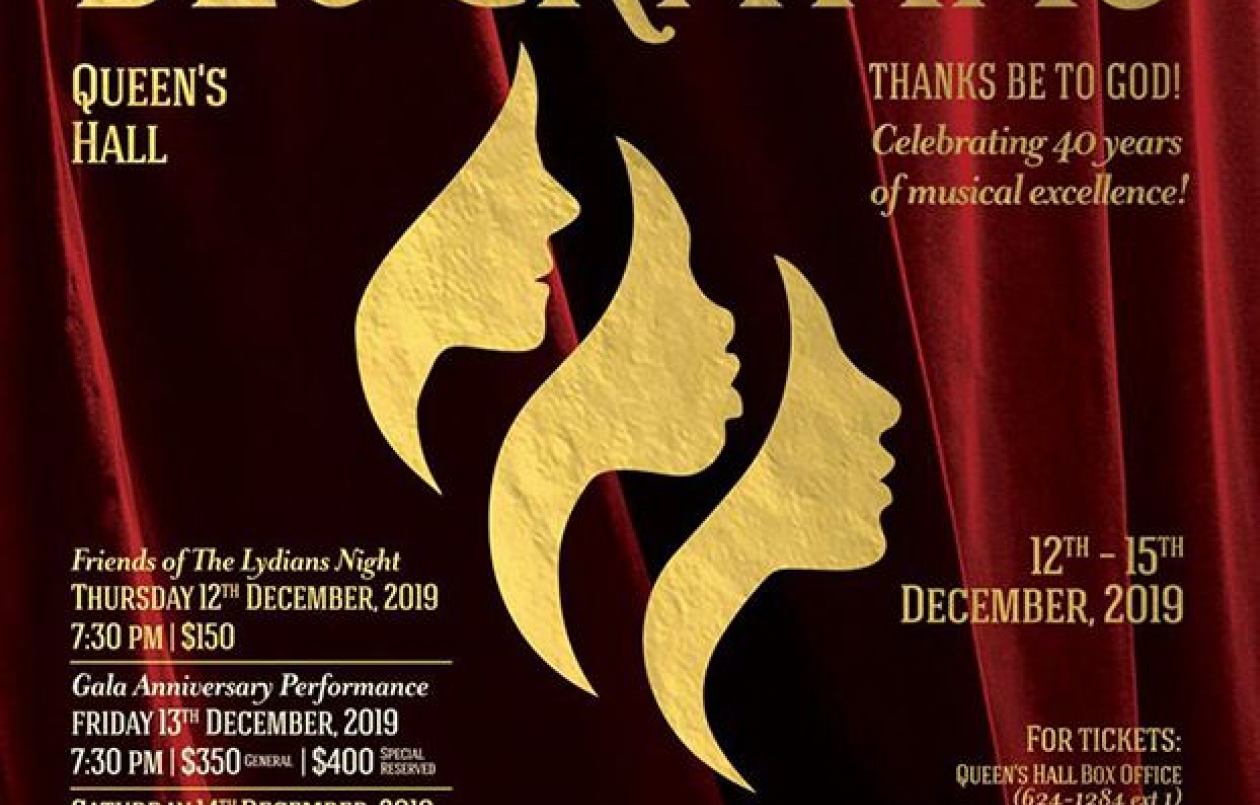 Get Directions to Queen's Hall