At the tip of the Dragon's Mouth on the North Western Peninsula of Trinidad, there is a small cove called Anse Paoua. Situated around the coast from Scotland Bay and sometimes referred to as "Down D Islands" because it is accessible mainly by boat. The sheltered waters that surround the bay is a popular destination for a beach lime and a favorite anchor spot for the yacht's. The Chagaramas Development Authority manages the area and together with small groups organize regular cleanups, however, uncaring sea bathers continue to leave garbage at the beaches. Up until 1941 local residents inhabited the area but because of the strategic location the British Government leased the Scotland Bay Region for 99 years to the US Government. Descendants of the original land-owners are currently in a land-dispute with government to have their property given back. Between 1941-1972,and during World War11 the Americans constructed a recreational center which consisted of a hall, tennis and basketball court, a football field and a zoo. There were 30,000 troops stationed at the Naval Base and the lyrics of the song “Rum and Coca Cola” describe the activities that took place there." Both mother and daughter working for Yankee dollar. This song originally sung by Lord Invader gained international popularity by the Andrew Sisters. The hike is one-way and will take 30 minutes to walk around the Scotland Bay Coastline to Anse Paoua. It is suitable for children 5 years and up. Scotland Bay to Anse Paoua... Thursday 1st August (Emancipation Day ) Assembly: 7.00am KFC Carpark Note: a large boat is available to transport passengers. Boarding and Parking at new venue: Cruise Inn Optional paid parking available at Cruise Inn Registration on the morning of the hike : $100.00, kids $60.00 For further details contact Mario 749-2956, Jamal 761-1889, Marcia 490-2421 or islandhikers.com 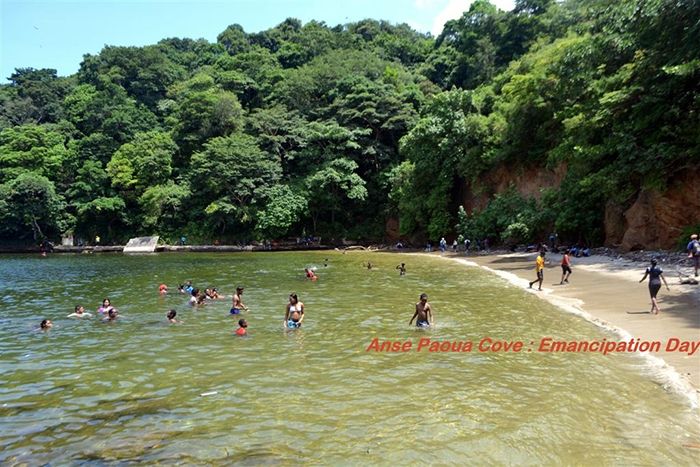